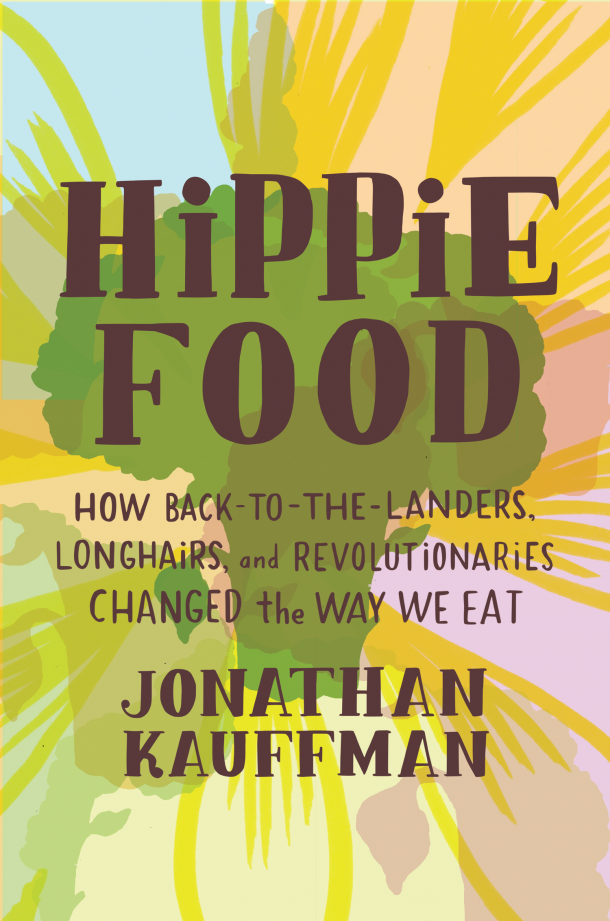 Brown rice. Kale. Sprouts. Once an alternative strain of American cuisine associated with vegetarian communes and college co-ops, “hippie food” has come a long way over last half-century, now commonly found on mainstream grocery shelves, restaurants menus, and school lunch trays. But it took the help of some free-spirited food freaks to get it there.

We talked with Jonathan about the birth of eating as a political act, the origins of these so-called “hippie foods” and their influence on the modern American diet, and what to make of modern trends like goji berries and chia pudding.

CUESA: Hippie food gets a bad rap these days. Why did you choose to write a book about it? Jonathan Kauffman: When I was a restaurant critic in Seattle, I visited a vegetarian restaurant that had been around for 30 years, and I had a huge hit of nostalgia. I realized that not only was this food disappearing, but that it was something I had grown up around and rebelled against in many ways, in learning to cook and in my interest as a restaurant critic. But it made me curious about where it came from, and why my family living in a small town in Indiana was eating it. I’ve made a career of chasing after the best and most delicious food wherever that may be, and so I’m fascinated by the stories that everyday food might tell as well.

What are some examples or staples of hippie food?

The dish that for me encapsulates hippie food the most is stir-fried vegetables and tofu with a simple ginger-garlic soy sauce, served over brown rice. It’s just one of those iconic dishes that everyone learned to make. I think of nut loaves, lemon-tahini dressing, casseroles, sprouts, yogurt, granola, or carob sweets made with alternative sweeteners. Those are a lot of the foods I grew up with. It was often heavy, hardy whole-grain vegetarian food that incorporated a lot of non-European flavors.

And lot of these foods are now mainstream, right?

Sure, granola is an obvious one. A lot of these foods existed on the fringes, but the counterculture of the ’60s and ’70s popularized them. Yogurt was only found in Eastern European and Middle Eastern families in the United States. Tofu was made in Japanese and Chinese American communities but didn’t really spread into smaller towns and the center of the country until the counterculture and vegetarian movement started embracing them.

What was this food counterculture responding to or reacting against?

The Baby Boomer generation was the first generation to grow up on a diet of industrialized food, which took off after World War II. That meant agriculture that relied on chemical fertilizers, pesticides, and herbicides. In the 1950s, there was an explosion of innovation in boxed and canned foods, instant products, food additives, and food coloring. The grocery system changed to favor supermarkets, creating a more homogenized and industrialized diet. This generation also grew up hearing about the downside of industrialization, such as pesticide contamination. Rachel Carson’s Silent Spring, which came out in 1964, really opened everyone’s eyes to the dangers of DDT. This counterculture was trying to create a new diet that was much more environmentally sustainable and healthy, and that they could make themselves, so they could opt out of the industrialized food system.

In the book, you talk about this moment as the birth of the idea of eating as a political act.

I was really fascinated by the degree to which that wasn’t ever a part of the discussion before, and how much that shifted in just a few years. The idea that my personal food choices—what I buy, what I consume—can have these larger political impacts on global hunger, the environment, and capitalism. It was a huge shift.

What were some of the big innovations in agriculture at this time?

The word “organic” was introduced in the United States in the 1940s by J. I. Rodale, who was the publisher of Organic Farming and Gardening and Prevention magazine. At the time, organic was considered fringe food. The back-to-the-land movement of the 1970s took all of these young people from college towns and cities into rural areas, where they had to figure out how to make a living, and agriculture was one of the main ways they came across. Because they were interested in avoiding pesticides and chemicals, these young farmers adopted Rodale’s ideas and formed associations like CCOF [California Certified Organic Farmers].  They built an infrastructure for distributing organic produce, and then created certification bodies.

How did farmers markets help spread and popularize organic?

Farmers markets had all but died out by the early 1970s, and most of the existing markets were just food halls with vendors. The back-to-the-landers were anticapitalist and interested in community and direct sales between farmers and customers. Because so many of their products were niche, they started up a wave of farmers markets in the Midwest, the South, and New England. They saw that as their primary vehicle for selling organic food.

What do you see as some of the most enduring legacies that have been absorbed into the mainstream from this movement?

The organic industry is the biggest financial success. It’s a $40 billion marketplace. I also think the network of natural food stores and the availability of natural foods and organics in mainstream grocery stores are a direct consequence of the success of these products with customers. But I think the thing that is the most enduring is that the mainstream has accepted the counterculture’s idea of what healthy food is. It’s higher in whole grains. It’s lower in meat. It’s higher in fresh fruits and vegetables. It’s lower in processed sugars. Whether people do or don’t want to eat that way, they certainly recognize that it’s healthier, and so do the government and academic nutritionists. That was not the case in 1975.

You touch on the “new hippie food” of today. What’s different this time around?

One major difference is just access to products. The ingredients that people have access to today are so much broader, and the produce is so much better. What was a superfood in 1970, like molasses, wheat germ, or yogurt, is now maca, probiotics, and goji berry. We’re still embracing super foods with the idea that they have these miraculous properties. It’s the same impulse. But more importantly, it’s also tastier. I’m fascinated by what we often write off as food trends, like paleo and gluten-free and veganism, and how much innovation takes place in those movements in order to make food that’s edible and tasty. Things like chia pudding with almond milk are fascinating to me. I think that all that stuff is going to spread and influence our cooking in years to come.

In terms of the food counterculture, people’s awareness of the politics of food has also really grown.

What I love about the present moment is we’re so much more focused on race and class, and how to make healthy food accessible within communities where it hasn’t been. People who are on the forefront of the sustainable food movement right now are from communities of color. I think the counterculture movement of the ’70s subconsciously alienated a lot of communities of color. Since the discussion is now coming from within those communities, it’s making connections that need to be made and hopefully giving it more reach.

Well, my mom’s granola recipe is still the best granola around. But the meal that I make the most is lentil soup. That was one of the first things I learned to make in college. Lentil soup with kale just resets the system.

Pick up Jonathan Kauffman’s Hippie Food, and join him next Tuesday, January 30, for a signing and talk at the Commonwealth Club.