That’s how Dot’s Baking Pantry has brought joy to people at the Jack London Square Farmers Market for more than 20 years. And the woman who started it all, Tina McKnight, plans to continue the legacy for many more years, offering her own spin on her mother’s and grandmother’s traditional recipes. When you ask her why she remains so dedicated to the farmers market, she replies with a smile: “I love what I do.”

From Fashion Student to Flight Attendant to Baker

Owning a bakeshop wasn’t Tina’s first career path. She grew up in the Bay Area, and early on she studied at a fashion institute, then jetsetted around the country as a flight attendant. “That was always something I wanted to do when I was younger. I loved the clothes and the travel!” she recalls.

One year, the airline employees went on strike, and Tina’s sister suggested that they use that time to open up a cookie shop. Tina was skeptical at first: “I told her I didn’t know anything about baking, and she said that it was the perfect time to learn.” With her sister’s culinary school experience, they successfully opened up a shop in Vallejo. After the strike ended, Tina went back to the airline but continued to work with her sister part-time.

Fate and family would eventually bring her back to baking. “When the airlines started laying people off, they started moving us around,” she says. “They wanted to move me to Chicago. I decided I couldn’t go because not only was I already married, but I had a child. I didn’t want to be away three or four days a week. So then I went into baking full-time.” 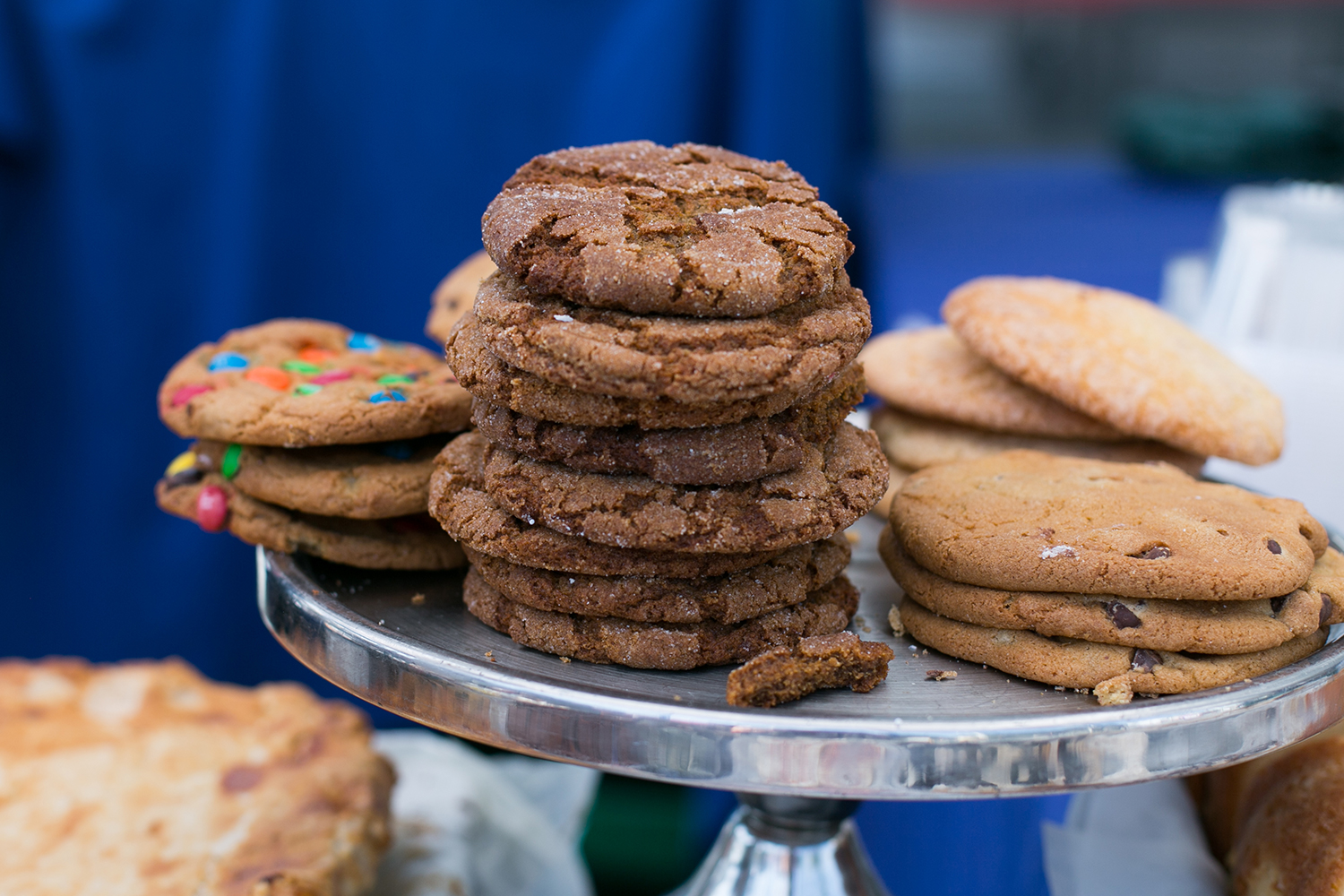 A Dash of This and a Feel of That

After her sister no longer wanted to work at the shop, Tina stayed with the business and decided to take it to the next level. She expanded it by opening up a restaurant close to Oakland’s City Hall, which allowed her to spend more time with her three kids. “I didn’t want my kids to be latchkey children, so my place was only open from the time I dropped my them off at school to the time I picked them up,” says Tina.

Then she discovered farmers markets. “When I did the farmers markets, I thought ‘Oh wow, I can actually just do the markets, go and bake when I need to for a market, do the market, and that’s it,” she says. Tina closed her restaurant and with a newfound flexibility and freedom, she was able to continue to put her family first.

Being on the shy side, Tina named her baking business after her mother, Dot, who was born in the South and was a skilled home baker. Dot never wrote down the specifics of her recipes, leaving Tina to experiment with ingredients until she got the formula right. “She’s from the school of ‘a dash of this and a feel of that,’ so there’s no recipe.”

Tina adds her own modern twist to her mother’s Southern classics, but if you ask her how she got her baked goods to be so delightful, she remains modest: “I must admit I am nowhere near the baker or the cook that my mom was.”

Adapting to a Changing Oakland

As one of the farmers market’s original vendors, Tina has been witness to the ever-changing Jack London Square landscape over the years.

“The development here has changed and moved out a lot of people, so the clientele has definitely changed,” she says. “It was nice when Jerry Brown was mayor here; he would ride his bike down here to the farmers market.”

Tina says these changes have not hurt her business, though she feels that other factors have had an impact. “The only thing that has really hurt business is the fact that there are more markets, and people can go to places that are closer to home,” she says. “But I must admit, I can’t think of any market that is more beautiful than this one.” A Place of Happiness and Memories

Today you’ll still find Tina at the farmers market on Sundays, along with her son Bryce, who has been running the business with her. She sees Bryce as the future of Dot’s Baking Pantry.

When it comes to baking, Tina enjoys pushing boundaries to create goodies that shoppers can’t find anywhere else. In addition to taking cues from her family recipes, the menu is often inspired by Tina’s travels. “When we are out of town we are eating in restaurants, so I look at the dessert menus and get ideas,” she says. “And then I come back and create my own concoction.”

With almost 30 different varieties of baked goods at her stand every week, there is something for everybody. “My theory is, I’m a place of happiness,” she says. “My philosophy is to remind people and bring back memories of past desserts from their childhood.”

Tina takes pride in sharing the stories that went into each pastry, cookie, or pie’s creation with her loyal market customers. And looking back at the journey that led her to Dot’s Baking Pantry, Tina would have it no other way. “Nothing makes me happier than to hear people tell me that they have never seen a booth like this before,” she says. “This was my calling.”

Visit Dot’s Baking Pantry at the Jack London Square Farmers Market on Sundays (10 am to 3 pm).

Photo of Tina McKnight by Peter DeSilva, courtesy of the San Francisco Chronicle. Photos of cookies and Bryce by Tory Putnam.